Emi and Tia: The Power of Art and Friendship 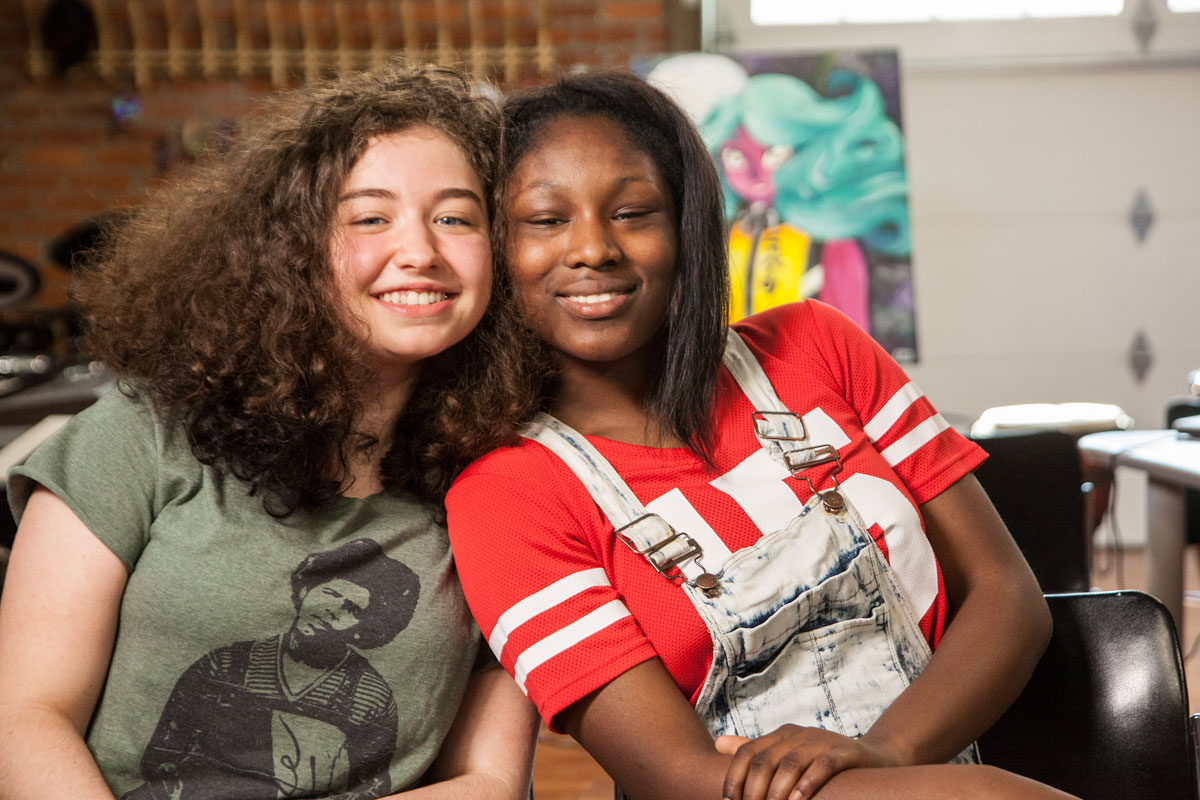 When Emi and Tia are together, an extraordinary amount of energy and joy fill the room, whether they are dancing, drawing or just hanging out. They like being together, and it shows. The teens clearly recognize and appreciate one another’s strengths, and they’re quick to point those strengths out to anyone who is listening.

Tia, age 19, says with a smile that Emi is “a joy, like a gift from God.” Tia smiles a lot as she talks, even when she’s recalling some of the difficulties she experienced growing up in central Ohio. She moved and changed schools over and over again. She missed school for weeks at a time while helping her mom settle in to a new place. She watched her mother struggle, and she worried about money when her peers were worrying about test grades or who would ask them to prom.

But Tia says all those negative things she’s been through stay outside the door when she comes to Transit Arts. She found consistency, support and a caring family at the youth arts development program, which is part of Central Community House and funded in part by United Way. On its website, the program describes itself as transporting “young people to a place of discovery — where creative abilities expand and doors open to a world of possibilities.”

The girls describe Transit Arts as doing exactly those things and also as “a foundation.” Emi, age 16, is a junior at Upper Arlington High School. She’s introspective, a little quieter than Tia, and she says both her world and her confidence have expanded since she joined the program. She mentions Tia’s amazing talent for dancing several times and how grateful she is for her friendship and her encouragement. Tia refused to let Emi give up on her desire to make the advanced dance team.

“Transit Arts is a place where I know someone’s going to care, and someone’s going to be happy to see me. It’s like a family you get to joke around with and have fun. I really didn’t have that before I came to Transit,” Emi explains.

Except for summer and holidays, the girls don’t see one another as often as they used to now that Tia is a sophomore at Tiffin University where she is working toward a degree in music therapy. The staff at Transit Arts, she says, helped her focus her dreams into reality and steered her toward the program at Tiffin. She is looking forward to helping others as much as the staff at Transit Arts has helped her.

“The support here is extraordinary. What I’ve learned here is never let go of your dreams. Always have hope,” Tia says as Emi nods in agreement. Within minutes, the teens are giggling and mugging for the camera, enjoying their time together.

Donate today to United Way of Central Ohio’s Community Impact Fund. You’ll provide a stable, supportive environment that will help a child develop the behaviors and skills she needs to succeed in school and life.